The highly radioactive materials that require the most long-term radiation protection overtime come from nuclear reactors. They are highly radioactive. After a 3 to 4-years stay the reactor core, the uranium-based nuclear fuels are removed and transferred to an interim storage pool, for a first cooling and protection against their radiation.

One ton of spent fuel released from reactor contains, apart from uranium whose radioactivity is neglible in comparison, arond 34 kg of fission products, 10 kg of plutonium and 800g of actinides, uranium nuclei which have grown by capturing neutrons. France has decided to reprocess these highly radioactive materials in a large reprocessing facility, at La Hague near Cherbourg. After their first cooling, nuclear fuels are transferred to this plant, where they are stored for several years before being reprocessed. In other countries, like United states, spent fuels are up to now not reprocessed. In this case they will end as high activity waste. 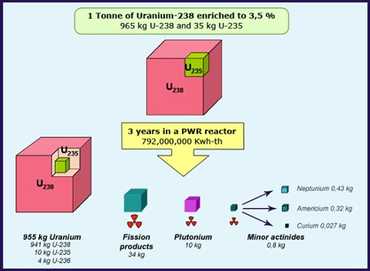 The first phase of reprocessing consists in separating the uranium and plutonium which can be reused to manufacture new fuel, from the products of nuclear fission and minor actinides. Minor actinides are uranium nuclei that have captured neutrons without undergoing fission. Some residues are very radioactive. Fission products and actinides are the source of high-level waste. The next step is to condition these residues. To do this, they are mixed with molten borosilicate glass. This molten glass is poured into a cylindrical refractory steel container. Once cooled, these containers are stored in ventilated wells. A 175-liter container contains 400 kg of waste including 11 of fission products and radioactive actinides. 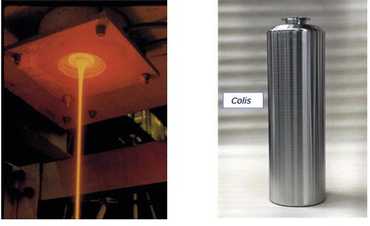 The virtue of borosilicate glass is to immobilize the atoms in the glassy material like an octopus for thousands of years, after which the most radioactive species will have lost their radioactivity. Waste vitrification therefore ensures that non-dispersion of radioactive materials for these thousands of years. After these millennia, waste radioactivity will have greatly diminished, but it is necessary to ensure the non-dispersion of the radioactive residue. To this end, the project in France is to store the containers at a depth of 500 m in a clayey geological layer, sheltered from water infiltrations. This is the CIGEO project. Pending the authorization and construction of such a center, vitrified waste is stored dry in La Hague.